Percentage of global trade to the EU:  15% 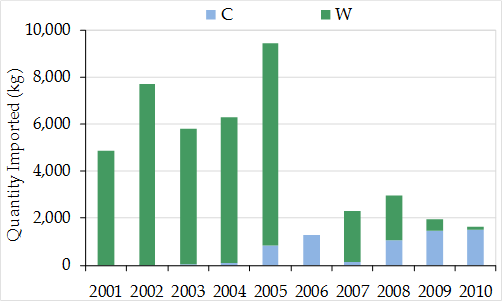 EU imports in 2010 primarily consisted of 50,000 live, captive-born fish imported directly by Belgium from Israel for commercial purposes, and 1,641 kg of caviar, of which the majority (1,524 kg) was captive-bred and the remainder wild-sourced, also imported for commercial purposes. Total imports of caviar decreased by 15% between 2009 and 2010, with the proportion of wild-sourced caviar also decreasing. Live imports have not been reported by the EU since 2007, when 2,000 live, captive-bred fish were imported.

The wild-sourced caviar all originated in Azerbaijan, while the captive-bred caviar primarily originated in Israel (66%) and China (33%). A zero export quota for wild-sourced caviar was in place for Azerbaijan, among other countries, for the quota year 01/03/2009 to 28/02/2010; a quota of 3,360 kg of wild-sourced caviar was in place for Azerbaijan from 01/03/2010. The SRG formed a negative opinion for wild specimens from Azerbaijan on 14/09/2010, which was confirmed on 03/12/2010. The conservation and trade of Acipenseriformes are discussed at each meeting of the Animals Committee in accordance with Resolution Conf. 12.7 (Rev. CoP14).