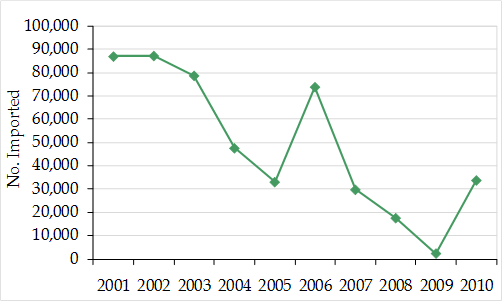 EU imports in 2010 principally comprised wild-sourced skins traded for commercial purposes (33,847 skins). Imports of wild-sourced skins increased by over 13-fold between 2009 and 2010, following three consecutive years of decline.
The vast majority of wild-sourced imports originated in Argentina and Paraguay (53% and 47%, respectively). The SRG formed a positive opinion for all countries on 22/07/1997, and confirmed a positive opinion for Argentina on 02/12/2008. The positive opinion for Paraguay was removed on 02/12/2011, with the exception of “existing stocks of legally acquired reptile specimens (skins collected during 2001, 2002 and 2003) in accordance with CITES Notification 2011/009”.