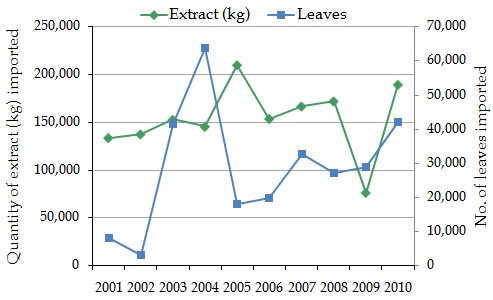 EU imports in 2010 consisted primarily of extract (189,688 kg, 2,065 litres and 2,244 extract reported without units), leaves (42,120) and dried plants (11,660 dried plants and 500 kg of dried plants). With the exception of a small quantity of seized/confiscated extract, all trade was wild-sourced; the vast majority was traded for commercial purposes.

All EU imports in 2010 originated in South Africa, with the exception of a small quantity of the seized/confiscated extract which originated in the United States. The SRG formed a positive opinion for specimens from South Africa on 23/02/2012.