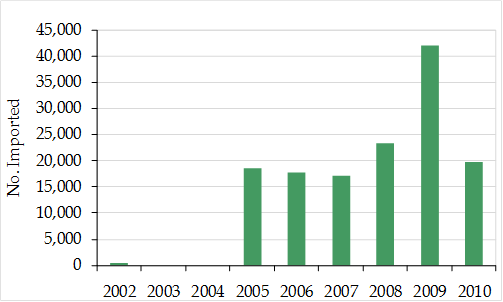 Imports of wild-sourced Arctocephalus pusillus skins reported by Turkey, all purposes, 2002-2010 (no imports were reported in 2001).

In 2010, Turkey reported the import of 19,848 wild-sourced skins for commercial purposes, all of which originated in Namibia. The SRG formed a positive opinion for Namibia on 27/03/2007.

Imports of wild-sourced skins reported by Turkey peaked in 2009, subsequently decreasing by 53% in 2010.