Percentage of global trade to the EU:  28% 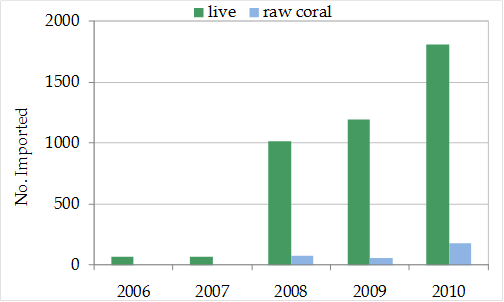 EU imports in 2010 were all wild-sourced and for commercial purposes, primarily consisting of 11,668 live corals and 1000 kg of live coral, with 198 pieces of raw coral also imported. The majority of trade originated in Australia, with all the live coral reported by weight originating in Indonesia. Imports of live, wild-sourced coral remained relatively similar between 2008 and 2010.

The SRG formed a positive opinion for wild specimens originating in Australia on 03/12/2010 which was reconfirmed on 20/06/2011. An import suspension has been in place for wild-sourced specimens from Indonesia since 19/09/1999; since 18/02/2005 there has been an exception for maricultured specimens attached to artificial substrates.