Percentage of global trade to the EU:  17% 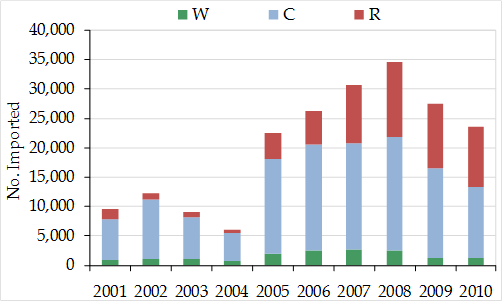 EU-reported imports from Appendix II/Annex B populations in 2010 principally consisted of skins, the majority of which were captive-bred (12,071 skins) or ranched (10,346 skins); 1,209 wild-sourced skins were also imported. Captive-bred and ranched skins primarily originated in Australia (64% and 96% of skins, respectively), while 98% of the wild-sourced skins were imported directly from Papua New Guinea.