Percentage of global trade to the EU:  70% 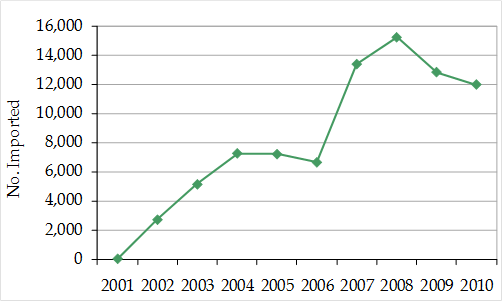 EU-reported imports of wild-sourced, live coral of Duncanopsammia axifuga, all purposes, 2006-2010 (no imports were reported prior to 2006).

EU imports in 2010 comprised wild-sourced coral exported directly from Australia for commercial purposes, including 8,583 live corals and 54 raw corals. No imports of D. axifuga were reported by the EU prior to 2006; since then, imports of live, wild-sourced corals have increased every year, with a 49% increase between 2009 and 2010.

The SRG confirmed a positive opinion for wild specimens from Australia on 02/12/2011.