Percentage of global trade to the EU:  10% 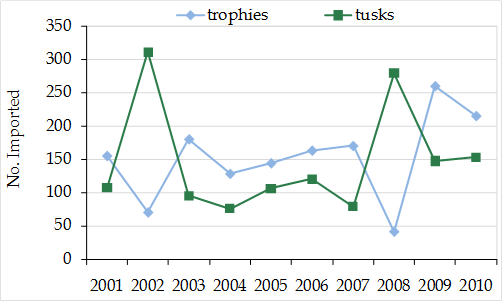 Wild-sourced trophies and trophy items in trade that can easily be equated to individuals consisted of 215 trophies, 153 tusks and 241.9 kg of tusks, 46 feet, 23 ears and 11 tails. This equates to approximately 331 individuals, using the conversion factor of 1.88 tusks per elephant[1], and not including tusks reported by weight. A permit analysis of importer-reported data revealed that several trophy items were imported on the same permits as other trophy items, possibly reducing the number of animals involved to 314.