CITES Appendix:  I (except for the populations of Botswana, Namibia, South Africa and Zimbabwe, which are included in Appendix II for specified purposes) 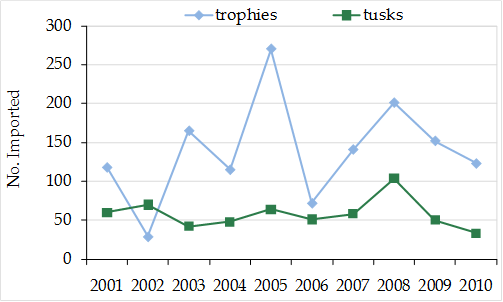 Wild-sourced trophy items in trade that can easily be equated to individuals consisted of 123 trophies, 33 tusks and two tails. Using the conversion factor of 1.88 tusks per elephant[1]], this equates to approximately 143 individuals. A permit analysis of importer-reported data revealed that the two tails were each imported on the same permits as other trophy items, possibly reducing the number of animals involved to 141.

Imports of both Annex A tusks and trophies decreased in 2010, continuing the downward trend seen in 2009. Imports of Annex A tusks (reported by number) in 2010 were the lowest reported over the ten-year period 2001-2010.

In 2010, there were several instances where a L. africana import originating in a country with an Appendix I/Annex A population was reported as Appendix II/Annex B: Finland reported the import of two wild-sourced trophies directly from Tanzania, and Germany reported the seizure of a total of several items exported directly from Nigeria, Tanzania and Kenya.

Trade in L. africana is closely monitored through the CITES process following Decision 14.78 (Rev. CoP15). The SRG formed a negative opinion for Cameroon on 23/02/2012 and confirmed the positive opinion for Tanzania.