Percentage of global trade to the EU:  67% 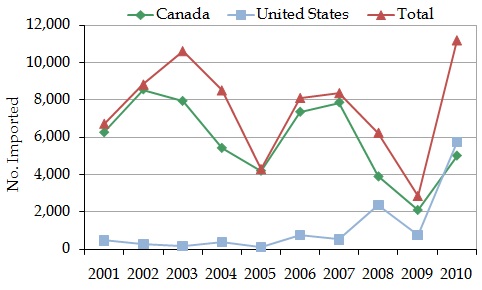 In 2010, EU imports principally consisted of 11,217 skins, the majority of which were traded for commercial purposes; small quantities of hunting trophies and trophy items were also imported. All trade was wild-sourced, with the exception of 20 garments reported without a source.
Imports of wild-sourced skins increased by almost four-fold between 2009 and 2010; imports originating in the United States were at their highest over the ten-year period 2001-2010.
The SRG reconfirmed positive opinions for specimens from both Canada and the United States on 27/03/2007.