Percentage of global trade to the EU:  98% 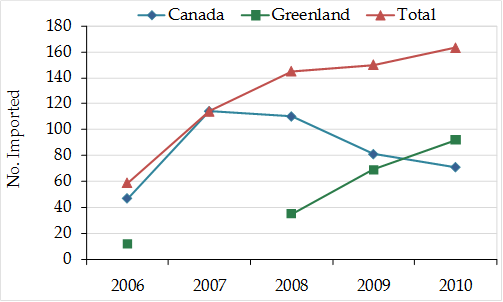 EU-reported imports of wild-sourced Monodon monoceros trophies, tusks, teeth and skulls (excluding tusks and teeth reported in kg) originating in Canada and Greenland, all purposes except ‘S’, ‘Q’ and ‘E’, 2006-2010.

All populations of Monodon monoceros are listed in Annex A, however in accordance with Regulation (EC) No. 2724/2000 and Regulation (EU) No. 709/2010 (applicable from 22 July 2010), all Appendix II Cetacea “including products and derivatives other than meat products for commercial purposes, taken by the people of Greenland under licence granted by the competent authority concerned” are treated as belonging to Annex B. As such, assuming the proper domestic licensing procedures were followed, it can be inferred that the 231 carvings, 92 tusks, 23 specimens, 1000 kg of specimens and two skulls originating in Greenland and imported by the EU in 2010 should be considered as trade in Annex B specimens. These imports were all wild-sourced and imported for scientific purposes or as personal possessions by Denmark.

The remaining trade in M. monoceros was directly imported from Canada and consisted of 63 wild-sourced tusks and eight other items imported as personal possessions, 37 wild-sourced scientific specimens and five pre-Convention carvings.