Percentage of global trade to the EU:  79%

IUCN Status:  Extinct in the wild 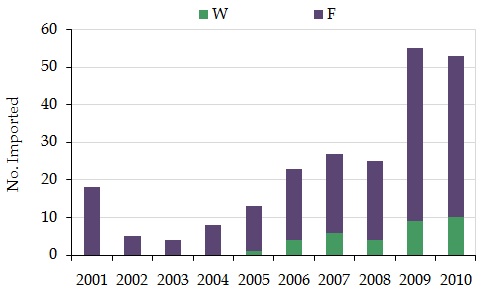 EU imports in 2010 principally comprised captive-born (source ‘F’) hunting trophies and trophy items (40 trophies, 3 bodies and 1 skin piece); the remaining trade (9 trophies, 1 horn and 1 skin) originated from the wild. With the exception of one captive-born trophy directly imported from the United States, all trade was imported directly from South Africa.

The total volume of trophies and trophy items imported by the EU in 2010 was slightly less than the level of imports in 2009, but still reflects an increase over previous years (2001-2008).

O. dammah is extinct in the wild and not native to South Africa. However, the species has been bred in captivity and released in the wild in the country. The EU imports specimens from such introduced populations. The apparent increase in wild sourced trophies may reflect a change in reporting practise for source codes, from F to W, to correspond with export permits.