Percentage of global trade to the EU:  36% 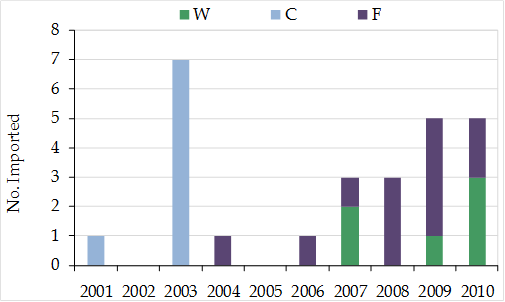 In 2010, EU imports consisted of five hunting trophies (two captive-born and three wild-sourced) and one captive-bred live animal traded for breeding purposes. The captive-born trophies were directly exported from South Africa, while the wild-sourced trophies were exported directly from South Africa and Namibia. The source of these trophies may have been mis-reported as the species does not occur naturally in either country; however, these specimens may have originated from captive bred stock that have been released into the wild.  Approximately the same number of trophies was imported in 2009 and 2010.