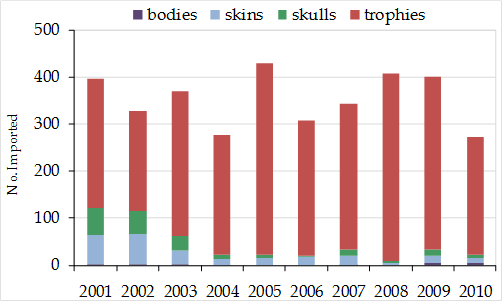 In 2010, EU imports consisted primarily of wild-sourced hunting trophies and trophy items, comprising 251 trophies, 18 teeth, 11 skins, six skulls, five bodies and two bones. These imports equate to approximately 273 animals, although an analysis of permits indicates that three skulls were imported on the same permit as a skin, possibly reducing the number of animals involved to 270. The wild-sourced trophies principally originated in Tanzania (33%), Namibia (18%) and Zimbabwe (13%). Imports of wild-sourced trophies and trophy items decreased by 32% between 2009 and 2010.