Percentage of global trade to the EU:  94% 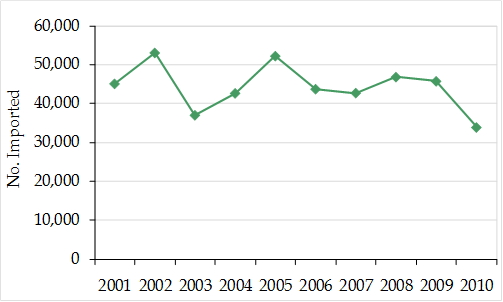 EU imports in 2010 principally comprised wild-sourced skins traded for commercial purposes (33,967 skins), with notable quantities of small leather products (3,414), garments (2,846) and skin pieces (1,820) also imported (of which the majority were wild-sourced and traded for commercial purposes). Imports of skins decreased by 26% between 2009 and 2010, reaching their lowest level over the period 2001-2010.

All wild-sourced trade in 2010 originated directly from Peru. The SRG formed a positive opinion for all countries on 22/07/1997, which was removed for all countries except Argentina, Bolivia and Peru on 02/12/2011. Exports from Peru were included in the CITES Review of Significant Trade in 2001.