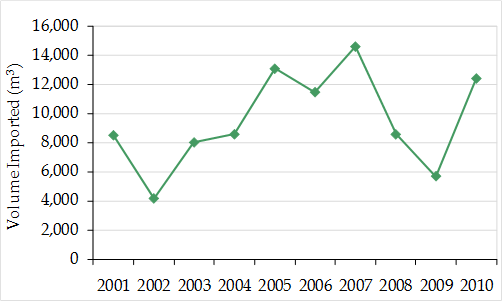 EU imports in 2010 primarily comprised 12,417 m3 of wild-sourced timber traded for commercial purposes. EU imports of wild-sourced timber more than doubled between 2009 and 2010, following two consecutive years in which imports decreased.
The majority of the timber was imported directly from Democratic Republic of the Congo (50%) or Cameroon (43%). The SRG formed a positive opinion for specimens from Cameroon on 02/04/2002, which was reconfirmed on 12/03/2009; a positive opinion was formed for specimens from the Democratic Republic of the Congo on 30/11/2009.