Percentage of global trade to the EU:  40% 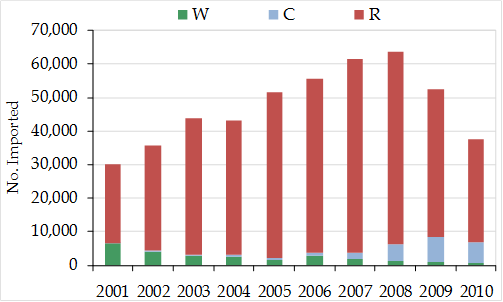 EU imports in 2010 principally comprised live specimens traded for commercial purposes, of which the majority were ranched (30,791 animals) and a notable quantity were captive-bred (6,108 animals); the import of 625 live, wild-sourced animals was also reported.

Although P. regius was selected on the basis of the ‘high volume’ criterion, total live imports (all sources) decreased by 29% between 2009 and 2010; 2010 is the second consecutive year in which imports have decreased.