Percentage of global trade to the EU:  59% 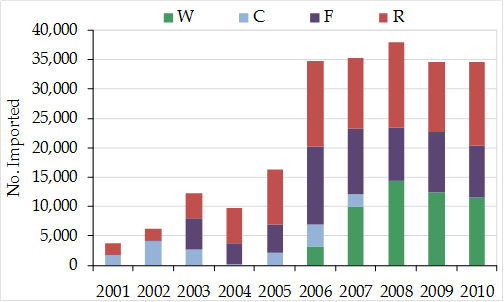 In 2010, EU imports principally consisted of live animals traded for commercial purposes (34,557 animals), of which 41% were ranched, 34% were wild and 26% were captive-born.

A long-standing import suspension for wild specimens of this species from all countries of origin was removed on 30/04/2004 and trade in wild specimens resumed in 2006. The SRG formed a positive opinion for wild specimens from Uzbekistan on 26/09/2006, which was confirmed on 14/09/2010; a positive opinion was also formed for source ‘F’ and ‘R’ specimens from Uzbekistan with a plastron length of 6-8 cm on 26/03/2001, which was confirmed for ranched specimens (no size limits) on 14/09/2010. The species was selected under the CITES Review of Significant Trade following CoP14 at the 23rd meeting of the Animals Committee; at the 25th meeting of the Animals Committee, Uzbekistan was categorised as of Possible Concern. Based on information communicated by Uzbekistan to the Secretariat on 06/12/2011, the population of Uzbekistan was removed from the review.