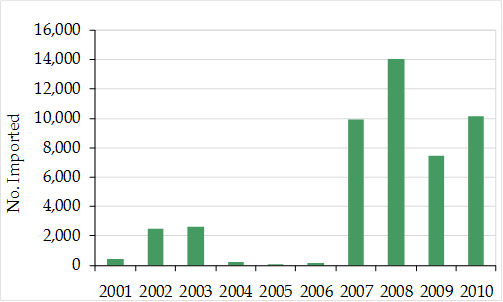 EU imports in 2010 principally consisted of live, wild-sourced corals imported for commercial purposes (10,181 corals), of which the vast majority were imported directly from Australia and the remainder (18 corals) were imported directly from Indonesia. Imports of live, wild-sourced corals increased by 37% between 2009 and 2010, following a notable decrease between 2008 and 2009.

The SRG formed a positive opinion for wild specimens originating in Australia on 20/06/2011 following selection of the species on the basis of the 2008 Analysis. An import suspension has been in place for wild-sourced specimens from Indonesia, with the exception of maricultured specimens attached to artificial substrates, since 18/02/2005.