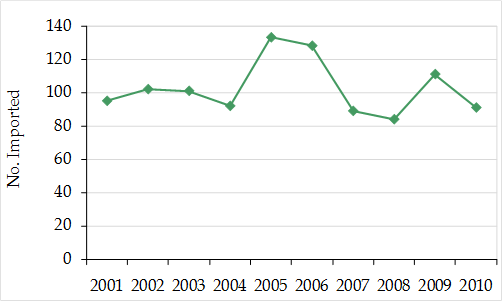 All EU imports in 2010 were wild-sourced. With the exception of trade for scientific purposes, imports primarily comprised skins traded for commercial purposes or as personal possessions, and hunting trophies and trophy items. Skins and other trophy items that easily equate to individual animals reported as purposes ‘H’, ‘P’ and ‘T’ equate to approximately 91 individuals, including 62 skins, 18 trophies, 10 skulls and one body. Analysis of permits revealed that one skull was imported on the same permit as one skin, possibly reducing the number of animals involved to 90. EU imports of wild-sourced hunting trophies decreased by 18% between 2009 and 2010.

All wild-sourced skins and trophies originated in Canada (79%) or Greenland (21%). The SRG formed a positive opinion for all subpopulations of Ursus maritimus in Canada except those of Baffin Bay and Kane Basin, for which a negative opinion was formed, on 02/12/2008. The positive opinion was confirmed on 30/11/2009; the negative opinion for the Baffin Bay and Kane Basin subpopulations was confirmed on 30/11/2009 and reconfirmed on 16/02/2010. U. maritimus from Canada was discussed at SRG 60 on 07/06/2012 and Canada was requested to provide more information.