Percentage of global trade to the EU:  96% 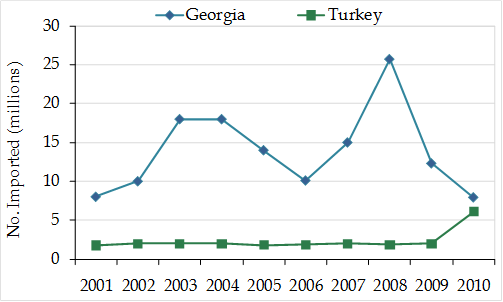 All EU imports in 2010 were live, wild-sourced plants imported for commercial purposes. The majority (57%) originated in Georgia (7,929,483 plants), of which 41% were re-exported via Turkey. The remainder (6,071,402 plants) were imported directly from Turkey. Although imports remained relatively constant between 2009 and 2010 overall, imports originating in Georgia decreased by 36% while imports originating in Turkey increased three-fold compared to 2009.